What Kind of Annual Incentive Plan Do Most Private Companies Use?

The leaders of most organizations look for some means of validating their approach to the type of incentive plan they put in place--or whether to even have a value-sharing arrangement at all  For such chief executives and others with responsibility for variable pay plans, data is a useful tool.  It can, however, also be a dangerous one. The value of data is that it gives a picture of what the market is doing; how others are addressing key compensation issues with which most businesses grapple. The danger comes when organizations put too much weight on what the data indicates and then simply try to mirror what others are doing.

Let's deal with each of these issues one at a time.

In February of 2014, World at Work and Vivient Consulting released the results of a study they conducted regarding variable pay plans in private companies. Nearly 190 participants from private, for-profit companies responded to the survey. (The response of private-sector companies that are publicly-traded were summarized in a separate report). Half of the focus was on annual incentive plans--the other half on long-term value-sharing. In this post, we'll just deal with annual incentive plans. The study was a 2013 follow-up to one done in 2011. Here are some of the core findings:

So what insights do we gain from these kind of statistics and what conclusions can we draw?

To avoid the potential pitfalls of data, organizational leaders must be very clear about the following issues:

The ability of a company to define each of those things and communicate them to employees is what will ultimately create the line of sight necessary to achieve performance throughout the workforce. Note that rewards is the fourth thing on the list.  In that respect, it's a kind of capstone--the mechanism by which you codify a financial partnership with your employees that reinforces the other three elements.

Data can't tell you the best way to do that.  Your approach to incentives has to be rooted in a wealth multiplier philosophy that drives how shareholders view value creation.  Wealth multipliers believe that sharing value with those who create it isn't just a fair thing to, it's a smart business strategy.  Value-sharing breeds a stewardship mindset that drives performance.  That ownership mindset is the purpose of variable compensation such an annual incentive plan.

When companies approach the design of their incentive plan in that context a lot of things fall naturally into place that data don't reflect. For example, the line of sight approach suggests there needs to be a balancing of company, department and individual performance metrics in determining payout schedules under the plan. It suggests the annual plan should work in conjunction with a long-term plan to create a balanced approach towards business growth.

In the end, data is interesting and provides an informed view of the variable pay landscape, however, it should not be used a planning tool.  Compensation in general and incentives in particular require that a strategic approach be used to ensure line of sight and sustained performance. 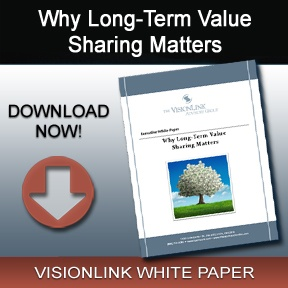