A common concern of business leaders about making increases in compensation is affordability. This is especially true of incentive plans. The assumption is that "costs" will go up if an annual bonus or some type of long-term program such as phantom stock or a profit pool is added--and there's no room in the budget for that kind of increase. It's not an unreasonable response. However, it's rooted in an incorrect premise. Let's look at it from a more enlightened perspective.

The reality is that pay should be one of the engines that drives improvement in shareholder value. This can only occur if there is a philosophical shift away from thinking of compensation as an "expense" that needs to be contained and towards treating it as an investment that has to be properly allocated. In the latter category, rewards are evaluated in the same way other capital or profit allocations are measured. There has be to be a measurable return on that investment.

Once that premise is accepted, a business must find a means of evaluating the economic benefit being driven by its pay programs.  One of those methods is to calculate your organization's productivity profit--the amount of net operating income that is attributable to the contributions of the company's people rather than other capital assets at work in the business.

When productivity profit becomes the source for paying out incentives, for example, those rewards become self-financing.  They are only paid out of value that has been created. If sufficient productivity profit hasn't been generated, then that reward is not paid out--or it is at least reduced.  This ensures that compensation is structured to preserve and enhance shareholder value rather than dilute it.

This approach treats all non-guaranteed compensation as value-sharing. This term is important because it eliminates the idea of cost from the pay equation and puts the focus squarely on what it should be.  Corporate "wealth sharing" is a function of value creation.  It requires an organization to get more precise about what that means for its business and what thresholds have to be reached for value sharing to occur. For example, one company defined value creation this way:

Your definition of value creation may be different, but the principle is that rewards (in the form of value-sharing) are not a cost but an investment to fuel growth.  Whether profits are applied to future capital acquisitions or to reward the individuals driving growth, it is all intended to improve shareholder value.

So, the logical next question is this: Will shareholder value increase in an environment where value-sharing is also increasing?  Is there a correlation between value-sharing and increased shareholder value?  The answer answer to both questions is yes as the chart below illustrates.  The key lines to focus on in the graphic are the ones highlighted in gold. Note how the internal rate of return on shareholder value increases as as the percent of increased value shared with employees also increases. This occurs because value is only shared as it is created and there is an appropriate correlation maintained between what is given to employees and how owner equity is improving. 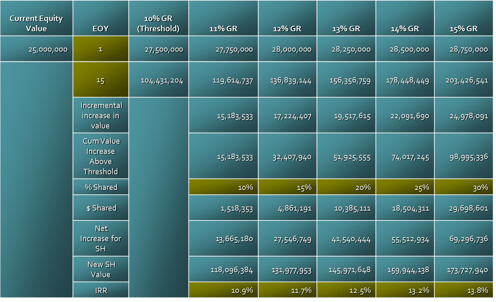 This concept of value sharing works because it employs a kind of reverse engineering approach.  Through modeling and forcasting, an organization can envision what future results it anticipates at various performance levels. It translates that projection into an increase in shareholder value.  It then determines how much of that increase it can (or thinks it should) share with those who help create it. (That's essentially what the chart above is illustrating.) It then brings that back to the present and makes a determination about how much of that value-sharing should occur through short-term plans such as annual bonuses and how much should be devoted to long-term arrangements such as equity sharing, phantom stock, bonus pools and other such plans.

So...if your goal is to increase shareholder value, remember that sharing value--properly engineered--can help you achieve that result.

Most company leaders want their key people to share their commitment to business growth. For that to happen,...

So…is it okay to open our eyes yet? Is the scary part over? Can we relax now and stop worrying about what...