"Incentives" Even Daniel Pink Could Endorse

There has been a long-running debate about incentive plans and whether or not they “work.” It usually centers on one central question: Can incentives measurably and positively influence employee performance?  While many in business assume it’s conventional wisdom that such plans have a meaningful impact, some assert otherwise. These opposing voices have been challenging the assumptions many business leaders hold regarding human motivation in the workplace.

One of the most recognized challenges to the value of financial incentives was made by Daniel Pink in his 2011 book, Drive (Penguin Group).  In his book, Pink contends that taking a “carrot-and-stick” approach to motivation is outdated and ineffective. He argues that employees are influenced more by intrinsic factors than by remuneration. Pink backs up his arguments with decades of scientific research on human motivation. His central thesis is that companies should pay employees adequately and fairly, thereby getting the issue of money off the table, and then give them lots of autonomy so their intrinsic motivations can take over.

Well, guess what? There’s no real disagreement here on any of those points. That said, motivational theory and research are great, but business leaders having been trying to figure out how to apply this approach in the real world, with real people, and with the growth trajectory of their companies at stake. What should businesses conclude from Pink’s assertions? Should they pay all employees the same? How do they compensate employees who have higher skill levels and are making greater contributions? Do they simply eliminate incentives all together and encourage employees to enjoy the “intrinsic” rewards associated with their jobs?  These are practical questions that need to be addressed in a way that respects the legitimacy both of Pink’s (and others’) arguments and of a company’s need to effectively frame the financial partnership it will have with its workforce.

Clearly, ignoring the role and impact of extrinsic rewards is impractical.  Instead, the goal of every business leader should be to develop pay strategies that reward superior performance while supporting and nurturing intrinsic motivators. Such an approach assumes the two are not mutually exclusive. Then can co-exist. This type of culture is built upon a correct understanding of the role of compensation in general, and incentives specifically, in a total rewards framework.

The four quadrants of a total rewards structure are a way of examining the combination of intrinsic and extrinsic factors that influence whether or not premier talent will join an organization, then stay—and how those individuals will perform while there.  If any one of these issues doesn’t measure up in the mind of a key person, that employee will leave the organization or not join in the first place. Or they will underperform. Let’s define what each of these factors means.

The ideal environment, then, is one where the Total Rewards Framework is in balance. Otherwise, if the quality of any quadrant is lacking for an employee, he will not perform at his highest level, and probably won’t stay around for long. So while incentives and other forms of financial rewards shouldn’t be viewed as tools of manipulation to influence employee behavior, their absence can likewise communicate a strategically damaging message to key talent. Pay needs to align with vision, strategy, roles and expectations or there is high potential for underperformance.

Consequently, as it relates to an intrinsic/extrinsic balance, the core issue is fairness. Fundamentally, incentives are about fulfilling a commitment to reward people fairly (even generously) for helping to fulfill the mission and business model of the organization. When this commitment is communicated and understood, the intrinsic desire of quality talent to deliver on the organization’s business plan is reinforced and unleashed.

Understanding that employees respond best to extrinsic factors that reinforce rather than diminish their intrinsic drive, we need understand what incentive plans should reward. Incentive plans “work” only if they compensate employees for actually creating value. This means that an organization must be able to clearly identify and articulate what value creation means in its business and then have a plan for sharing that value with those who produce it.

Incentive plans are viable if they are built on a self-financing premise.  This means, simply, that a company pays rewards only out of value that has been created; from what might be termed its productivity profit. This is the value increase that is attributable to the contributions of people rather than other capital assets at work in business. Productivity profit can be used to define a value creation threshold for an organization and become the point at which the company is willing to share value with contributing, results-producing employees.

If your incentive plans are not “working,” there’s a high likelihood you are not effectively defining and measuring value creation. As a result, you are probably treating that part of your compensation strategy as a device, a behavior manipulator. This is what Pink argues against. The term “incentive,” in effect, implies that one is trying to elicit a certain type of performance through a reward.

Value sharing is different. It implies plans are “self-financed” and succeeds in an environment where compensation is used to “reinforce” rather than “force” productive, results-oriented behavior that improves productivity profit.

When business leaders tie their incentive plans to a value creation model, they find such an approach can, in fact, have a powerful impact on employee behavior—just not in the way conventional wisdom assumes. The influence is a result of the outcome focus effective value sharing creates and how that emphasis impacts execution. Clarity invites better performance.  Therefore, when someone is clearer about the outcomes for which they are responsible—and a financial partnership has been well defined for their fulfillment—employees are “freer” to perform. In a sense, the value sharing approach gives them permission to apply themselves; it removes a barrier and replaces it with purpose and transparency. Line of sight is improved. Intrinsic motivators are let loose.

And Daniel Pink is happy.

For a deeper dive into this topic, download VisionLink’s white paper, Do Incentive Plans Really Work?

To learn how these principles apply to the Millennials in your workforce, attend our upcoming webinar: How to Pay Millennials. 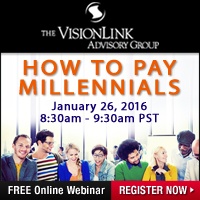