INCENTIVE PLANNING: The Secret to Building a Successful Bonus Plan

An annual bonus plan is the most common type of incentive companies offer their workforce.  And both employers and employees of many organizations will tell you their bonus plan is a bust.  (In a study conducted by Willis Towers Watson in October and November 2015, only half of the 150 respondents said annual incentive programs are effective at boosting individual performance levels.) So every fall, business leaders around the world start re-engineering their plan for the next year.  They add metrics, adjust payout levels, increase or decrease the bonus pool and otherwise go nuts trying to find a formula that will “work” this time.  Well, if this describes you…good luck this incentive planning season!  I feel your pain! 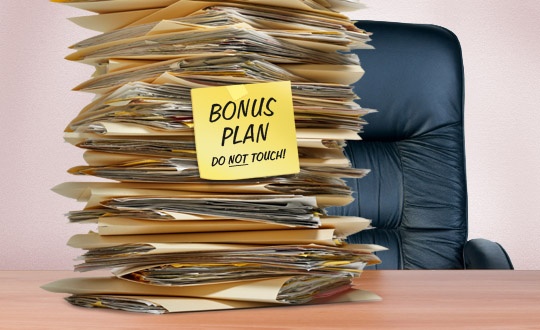 Actually, it doesn’t have to be like this.  The problem with most bonus plans is that they are built on the wrong premise.   They are designed as a tool to impact behavior.  Employers try to “force” their employees to act or perform a certain way by paying them an incentive when they do.  “If you do this, you get paid that. If you don’t, no dice!” A good reference point for how this usually turns out is Wells Fargo.  Enough said?

The “behavior” premise usually leads bonus plan designers to create a long list of metrics to cover every kind of action they are trying to elicit.  The result is usually confusion on the part of the employee and little or even negative impact on actual performance.  There is nothing worse than investing hours in a plan design that produces poorer results than you were experiencing before you put the incentive in place.

The other wrong premise to which employers fall prey is to make their bonus almost completely discretionary.  Even those who adopt this approach agree it is problematic.  Discretionary bonuses usually encourage an attitude of entitlement.  “This is less than the bonus you paid me last year.  What gives?”  Employees just come to expect the pay out as part of their compensation—and they likewise expect it to go up every year.  If you are one whose bonuses are discretionary, you know exactly what I’m talking about—and your stomach is churning right now.

There is a Better Way

Instead of trying to manipulate behavior through your incentive plan, consider a more enlightened “premise.”   Instead taking a “force” approach, adopt a “reinforce” strategy.  Turn your incentive into a value-sharing plan that encourages stewardship over certain outcomes and then rewards the value creation that results; and pays the bonus out of the new value that has been created.  Let’s walk through how you would do this.

1. Define Clear Outcomes.  This is done by articulating a clear pay philosophy.  Exactly what do you think you should reward?  Take time to think determine what it means to create value in your business and at what threshold of “value added” you are willing to share some of that wealth multiple with those who help create it.

2. Make Profit the Primary Metric.  Most bonus plans are too complicated.  They incorporate too many metrics.  Ultimately, profit is the only measure that really matters.  It doesn’t mean other ones can’t be included, but if profit isn’t the primary metric, your plan is destined to fail.  Yes, there are exceptions where incentives can be paid even when profits aren’t where they should be, but they should be just that—exceptions—and not the rule.

3. Pay Benefits Out of Productivity Profit.  This the way you remain true to the value creation principle and protect shareholders in the process.  Productivity profit is the amount of net operating income that is attributable to the contributions of the company's people rather than other capital assets at work in the business.  When productivity profit becomes the source for paying out incentives, those rewards become self-financing.  They are only paid out of value that has been created by the very people who are being paid the bonus.  If sufficient productivity profit hasn't been generated, then that reward should not be paid out—or at least the benefit should be reduced.

4. Tell Participants What the Rules Are.  At the beginning of every plan year, employees should know exactly what they need to do to earn their bonus.  And there should have been a discussion before that about the company’s pay philosophy, the importance of profits, how each employee’s role impacts profits, why their contribution is vital and how you consider them an important partner in the company’s growth plan.

5. Communicate and Celebrate Frequently.  One of the reasons some bonus plans fail is because no one ever talks about the plan after it is introduced.  Employees hear they are eligible and then don’t hear anything else until they receive their incentive payout.  That is a mistake and a lost opportunity.  Communicate often about your goals and where you are relative to those targets.  Celebrate openly when a new performance threshold has been reached.  Involve employees in the successes (and slowdowns) as they happen.  Build anticipation.  Take a lesson from marketers in this regard.

So there you have it—free advice for the incentive planning season.  Now you have no excuses.  Go build a killer bonus plan.

How Many Incentive Plans Should Your Company Have?

If you lead a business, that can be a difficult question to answer.  Should you have both a short-term and a...