So…is it okay to open our eyes yet? Is the scary part over? Can we relax now and stop worrying about what happened in 2020?

Not exactly, right? Certainly, things are looking up and business seems to be coming back. But I think few enterprise leaders would say they feel like they’re out of the woods or that there’s nothing to be concerned about going forward. Most are still trying to absorb the lessons of the last 12 months—and minimize their vulnerabilities going forward. 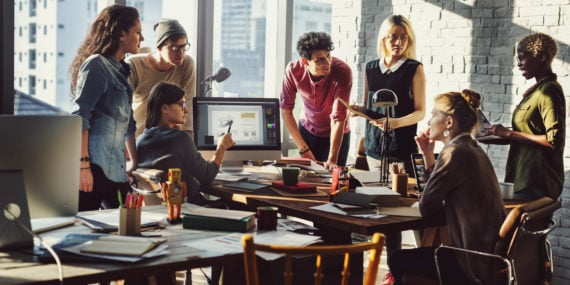 Which brings us to today’s topic—incentive compensation. What should be the corporate mindset about variable pay as we head into an uncertain future? Most organizations recognize that if they want to improve employee performance, they will need to reward results. But after 2020, they also feel they need to do so in a way that is financially palatable to company shareholders and not just good for incentive plan participants. So, how do you do that? How do you provide performance rewards that essentially pay for themselves? How can you have your (compensation) cake and eat it too?

The key to creating incentive plans that are self-financing is to clearly define what value creation means for your business. Here I’m speaking of a threshold that must be achieved before the company is willing to pay incentives to employees. Usually, this will be a profit target of some kind. At VisionLink, we narrow this down even further to a productivity profit measure. Productivity profit is one way of defining value creation.

To explain what is meant by productivity profit and how it can be used to define value creation, let’s look at a real-life example.

Underwriters Laboratories (UL) adopted this approach over a decade ago. UL has been in business for over a hundred years. You may recognize it as the organization that puts its seal of approval (so to speak) on certain kinds of products. According to an article in Chief Executive Magazine, about 12 years ago the company was having trouble. Its growth had plateaued, its operations had become siloed, morale was down, and the culture was dysfunctional. Things got so bad that divisions within the business were competing as if they were separate companies.

During this period, Keith Williams was hired as UL’s CEO with the intent of righting the ship and putting the company on a better course. The new chief executive made several changes, one of which was a significant alteration to the company’s rewards plans. Specifically, he did away with divisional and departmental incentives and put everyone under the same value-sharing plan. His mantra became, “We live together and we die together.”

Williams new approach to variable rewards was based on a philosophy he called, “pay the company first.” Under this methodology, UL’s leadership set an operating profit target each year that became a base measurement for determining how profits would be allocated over the subsequent 12 months. Up to that threshold, all gains went back to the company. Only once that target was exceeded would UL start funding an incentive pool to share value with employees.

In practice, here is how it worked. If, for example, UL’s operating profit target for this year was $80 million, 100% of profits up to that amount would go back to the company. However, the next $20 million of gains would go into an incentive pool in which all employees participated. From that point on, there would be a 50-50 split of profits between the company and the incentive pool, without limit.

So, let’s think about what Keith Williams accomplished with this approach. He sent a clear message about the performance metric the company deemed more important than any other—profit. Why profit? Because the company could not resume a growth trajectory without it. In the process of communicating that standard, he clearly defined what value creation meant at UL. It was profit that exceeded $80 million.

Importantly, Williams communicated the concept of value creation in a way that demonstrated to his employees how that threshold benefited them, not just shareholders. His people could easily see that once the profit target was hit, there was no limit on how much they could earn. In other words, the company would continue to fund the incentive pool if value beyond the threshold continued to be created. He essentially put employees in control of their earnings potential by clearly articulating the target that unleashed value-sharing within the company.

Keith William’s approach is a perfect example of what it means to calculate productivity profit. It is that threshold of profits which represents surplus value attributable to the performance of human capital within the business. Productivity profit begins at the point the company has generated the net operating income necessary to finance the revenue and growth engine of the company, and protect shareholder interests.

Therefore, what? How does this mean incentive plans don’t end up costing the company anything?

When companies follow the principle of productivity profit, all their value-sharing becomes self-financing. How so? Because value is only being shared out of the value that has been created. Stated another way, if there is no productivity profit, there are no incentive payouts. And if value-sharing is occurring, it is only because employees are generating the surplus value that merits it. In that context, incentives aren’t really costing the company anything, at least not in terms we traditionally think.

Now More than Ever

The principles of value creation and productivity profit are critical in our present environment. They are keys not just to protecting the future of businesses but to safeguarding the interest of all their stakeholders as well. When a company commits to value creation thresholds as Keith Williams boldly did at UL, it minimizes financial vulnerabilities for the company while making employees feel like true growth partners in building the future of the company.

Incentive compensation is needed now more than ever. However, it must be done in a way that is self-financing. It must not cost the company anything.

5 Rules for Incentive Compensation in the New Economy