An engaged employee is like the star student in an elementary or high school class.  The teacher recognizes the pupil’s work ethic and commitment and wants her other students to be “just like that one.”  So she sets up a system of rewards and punishments designed to promote the model behavior she’s trying to encourage and inhibit the kind she’s trying to suppress.  The hope is that this “ying and yang” approach will prompt a loyalty to learning—and instill the conduct the teacher prefers. The report card becomes the means of measuring whether it’s all working. More often than not, the metrics on that appraisal evidence it’s not. 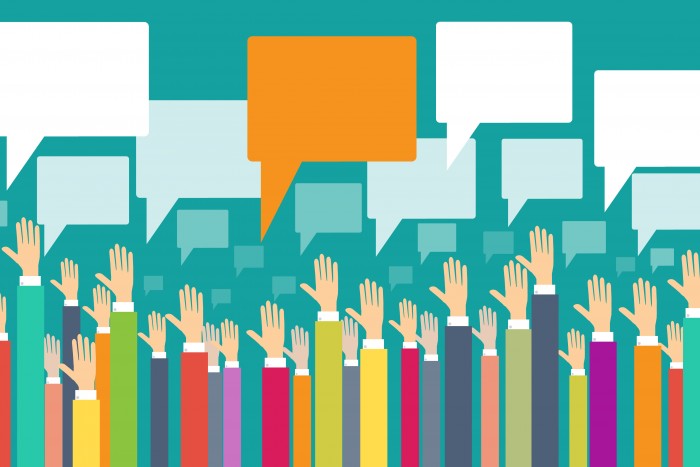 Historically, this same scenario has played itself out in business. Enterprise leaders have sought various means of “encouraging” the commitment, loyalty and engagement they seek.  This has led some to employ pay programs as their own version of a reward and punishment system designed to elicit the performance they want. Annual appraisals have served as the report card—with mixed results at best.

But that was then and this is now. We have entered a new age in the evolution of the employer-employee relationship.  A Deloitte Review article and study from January 2015 describes the shift this way:

After decades of corporate discourse about the war for talent, it appears that the battle is over, and talent has won. Employees today have increased bargaining power, the job market is highly transparent, and attracting top-skilled workers is a highly competitive activity. Companies are now investing in analytics tools to figure out why people leave, and the topics of purpose, engagement, and culture weigh on the minds of business leaders everywhere.

Our research suggests that the issues of “retention and engagement” have risen to No. 2 in the minds of business leaders, second only to the challenge of building global leadership.

…The employee-work contract has changed: People are operating more like free agents than in the past. In short, the balance of power has shifted from employer to employee, forcing business leaders to learn how to build an organization that engages employees as sensitive, passionate, creative contributors. We call this a shift from improving employee engagement to a focus on building an irresistible organization.

The Deloitte report goes on to identify five elements that drive engagement in irresistible organizations (see Figure 1 below). 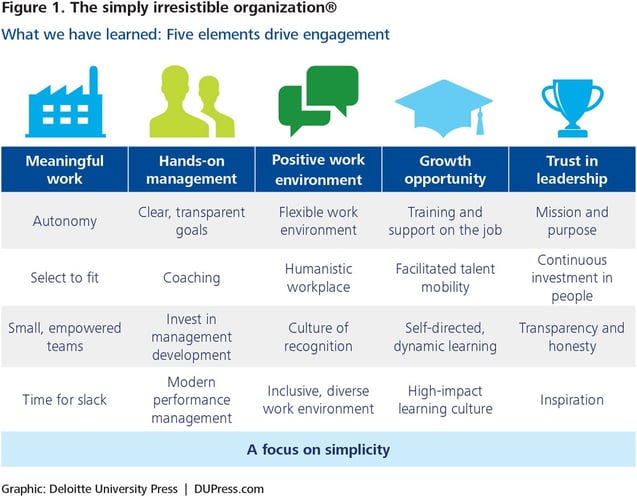 So where does compensation fit in this new engagement environment?  Does it play any role?  The Deloitte analysis suggests its impact is minimal. Other studies indicate it is a larger factor. Payscale’s 2015 Compensation Best Practices Report, for example, indicated that inadequate pay is the number one reason people leave an organization.  To the extent attrition can be considered the antithesis of engagement, one might be confused by what seems to be conflicting data analyses among researchers regarding the influence compensation has on this much sought after quality in employees.  The Deloitte report explains the discrepancy this way:

Most studies show that compensation is an important factor in employee satisfaction. Research by Aon Hewitt, for example, shows that it ranks among the top five drivers (but is not number one).  In this article, we do not discuss compensation because much research shows that pay is a “hygiene factor,” not an “engagement factor.” In other words, in most cases if compensation is not high enough, people will leave—but increasing compensation does not directly increase engagement (with certain exceptions).

One organization we studied told us that among the highest-potential employees, the organization could directly correlate pay increases with retention—but among the remaining 90 percent of the workforce, compensation simply had to be competitive and fair within job families. Our discussions with clients confirmed that once pay is competitive and fair, the 20 issues we discuss in this paper have a much greater effect.

A Sense of Partnership

My view is that the conclusions being reached regarding the impact of compensation on engagement, while not inaccurate, are incomplete.  As a result, at the risk of being presumptuous, I would add a sixth element to Deloitte’s list: A Sense of Partnership. The pay strategy of an organization performs an essential role in framing the financial partnership an organization desires to have with its employees, particularly with its key talent. If the financial component isn’t defined, engineered and communicated successfully through a clear pay philosophy and strategy, you will see compensation quickly move from being a “hygiene factor” to one of engagement.

In our work with clients at VisionLink, we find that when businesses are able to make their employees feel like essential partners in the company’s growth plans, they secure greater commitment and focus from those people.  When compensation is considered in this context, the issue is no longer whether it is “fair” or “adequate” enough.  Rather, it becomes a matter of how people are being paid and what that approach is communicating.

Let me explain what I mean by this with an example. Suppose an executive has a salary that is at the 90th percentile of market pay and participates in an annual incentive plan that pays him an additional 50% of his salary if certain performance standards are met. One could say such an arrangement is very “fair” in terms how much that executive is compensated.  However, let’s further assume that same executive is sitting in meetings where organizational leaders are talking about the company’s goal of doubling revenues over the next three to five years—and how important it is that the management team get behind that target.  Is it possible the executive could perceive a disconnect between the priority he’s hearing about in these strategy meetings and how he is being paid?  More specifically, might the executive be left wondering what part of his pay arrangement will compensate him for the long-term value he’s being asked to help create? When he discovers there is no such mechanism, is it likely disillusionment will set it?

Again, the pay approach a company adopts frames the financial nature of the partnership it wants to have with its employees.  It helps communicate what’s important, what role the employee has in the company’s priorities, what’s expected in that role and how that person will be rewarded if those expectations are met. If there is not continuity through all the elements of the partnership relationship, the confidence of employees can waver and wane.  This is when pay starts adversely affecting engagement.  It’s not that the pay is “inadequate,” it’s that there are inconsistencies in the partnership. That incongruity breeds distrust—the enemy of engagement.

So, while I agree with the five elements Deloitte has identified as essential in building an irresistible organization, I would encourage any organization seeking greater employee engagement to place a high priority on framing an effective financial partnership. While pay alone won’t secure the engagement you seek, an ineffective approach to compensation can just as surely kill it.

To dive deeper into this topic, view our previous webinar: Who You Should Hire and How to Pay Them.

What are You Doing About Your Employer Brand Strategy?

You don’t get to decide what your employer brand is.  Sorry.  Others impose it on you; specifically your current...

5 Talent Trends You Should Pay Attention to in 2017

Over the past few years, if you lead a business you have likely experienced seismic shifts in your workplace. ...

It is both the best of times and the worst of times to lead a business these days.  If you’re a CEO, president or...