Much has been said in recent years about the disparity of earnings between those who lead organizations and those employed by them.  The underlying theme is unfairness and the premise is that CEO compensation exceeds that of rank and file employees in a disproportionate way relative to the value each bring to their organizations.  Few meaningful remedies are ever offered. For the most part, the subject simply makes for entertaining political conversation. That discussion will surely rachet up a few notches during the upcoming election season, so fasten your seat belt. (Sigh!) 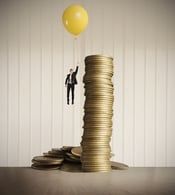 So let's talk about a solution, shall we?  It's really not a mysterious or nefarious issue. Paying business leaders a lot of money and compensating employees fairly is not a mutually exclusive exercise. In fact, instead of thinking about how much we should lower the pay of CEOs in our country, let's instead talk about how businesses can increase the earnings potential of those who work for them.

Let's start by dealing with the elephant in the room. Do some CEOs earn too much money?  Well, perhaps, but that depends on how we define "too much." Here's a specific example of what I mean.

When Jack Welch left GE, he received (and continues to enjoy) a retirement benefit valued at approximately $9 million per year plus perks. At the time of his retirement, his package received a lot of press and created no small controversy. The reality is that Welch's package amounted to less than 3/100s of 1% of the shareholder value that was created during his tenure (0.03% of $396 billion). His total compensation during his entire period of service was less than 2/10ths of 1% of the value he helped create.

So, here's the question: Was Jack Welch "overpaid"?

This example illustrates a fundamental perspective that should be at the root of a discussion regarding the merits of anyone's compensation. As you juxtaposition Jack Welch's total pay and benefits arrangement with GE's results during his tenure, it hardly seems exorbitant. This is because compensation is being evaluated in the context of results that have been achieved - not strictly within an expense framework against which no commensurate value is being reconciled.

Although the numbers in your business may vary widely from those illustrated here, the premise and principles applied should not. Compensation should be linked to results that are quantifiable, measurable and that can be impacted by the person being rewarded for their achievement. And this doesn't just apply to the CEO of the company.

Businesses will run up against the "fairness" argument if there is no rationale for the way their pay system is constructed. This is rooted in the age-old biblical principle that says: "Where there is no vision, the people perish." In that sense, employees within an organization want to know essentially three things:

A company can succeed in addressing those three issues by adhering to three standards:

The combination of these three elements ensures the company has clear reasoning that supports its approach to pay, has a mechanism for envisioning and managing pay programs that will benefit both shareholders and employees and has a means of allowing all stakeholders to participate in the wealth multiple growth represents.

All of this is rooted in the idea that the most successful companies are wealth multipliers.  They don't see the pursuit of improved shareholder returns and increased compensation for the workforce as mutually exclusive endeavors. In fact, quite the opposite. They recognize that increased shareholder return is more likely to be achieved if they allow those who create value to participate in it.

Companies that are successful at this start by defining a clear vision of the future company. They then further define in greater detail the outcomes that will need to be acheived to realize that vision. Considering things in those terms requires business leaders to think through the skill sets and roles that will be needed to realize those results. This in turn forces the organization to communicate clear expectations to individuals who are working in the business which also instills a spirit of stewardship.

That kind of ownership mentality only firmly takes hold when roles and expectations are linked to financial rewards--both short and long-term--that better define for employees "what's important" to the business and what its willing to "pay for." When this is done within the wealth multiplier philosophy just described, individual employees become business partners instead of just employees and compensation becomes the means of creating a unified financial vision for growing the company.

When all this comes together, employees sense there is fairness in the approach to pay and feel invested in the success of the company. Pay isn't the only thing that achieves this, but if it isn't done right then there is a breakdown of trust and performance slows.  Conversely, compensation done "right" instills  a sense of confidence and promotes success cycles that will create for everyone the wealth multiple described here.

In summary, there needn't be a war on CEO pay to overcome "income inequality." Instead, companies simply need to treat employees as business partners in driving growth for the business and then build and execute a pay structure that reflects that relationship.

If you want to see this principle applied better in your organization, learn about The 3 "Habits" of Highly Successful Pay Plans by downloading VisionLink's recently published report today.